Have you ever wondered why you have a sudden impulse to bite a cute child, or why your sister keeps insisting that your newborn son looks just like your hubby, even though at this stage he mostly resembles a cabbage?

Never fear, science has the answer – or at least some rather intriguing theories. Read on!

Why are babies so darn cute?

Babies are in possession of “cuteness cues” – large foreheads, large eyes, button noses, and plump cheeks – that activate the reward centres of our brains when we look at them. This is all part of nature’s cunning little trick to ensure that we don’t eat or abandon our babies as soon as they get on our nerves.

But the less aesthetically-pleasing bubs need not worry. There are enough of the right hormones to ensure a mother’s (and father’s) love – even if everyone else has recoiled in horror.

Why do we want to eat our babies?

No, I’m not referring to that desire you have to eat your baby when they get super-annoying (as alluded to above). I’m talking about that mad urge you get to bite something because they are so unbearably cute, like a puppy or a baby.

This “cuteness aggression” is apparently caused by having our wires crossed. Specifically, a study has found that sniffing a newborn activates the same pleasure centres as when we are near delicious food.

Why do we like the smell of our baby’s poos?

OK, “like” might be an exaggeration, but we apparently prefer our own baby’s emissions to those of other babies.

A recent study showed that mothers – who were asked to sniff soiled nappies belonging to their own child as well as those from unrelated babies – consistently ranked the smell of their own child’s faeces as less repulsive. This remained the case even when the nappies were deliberately mislabelled with different babies’ names.

While it may simply be the case that mothers have grown accustomed to their baby’s smells, a more compelling theory is that the ability to tolerate your child’s poopy offerings is an evolutionary adaptation designed to override disgust so that parents can care properly for their young.

Why do babies cry?

We can run through the usual gamut of reasons as to why babies cry – because they’re hungry, wet, lonely, sick, bored…

But scientists have managed to add a sinister motive to this very common infant behaviour. Apparently, babies also cry for the purpose of preventing new siblings, thus allowing them to enjoy their parents’ undivided attention for longer.

Since babies are generally incapable of sitting Mum and Dad down and rationally discussing their family planning options, they resort to what they know best – crying. It is theorised that the constant getting up to tend to a squalling infant kills parents’ sex drives (no duh). The extra breastfeeding also delays the mother’s ovulation, meaning that there won’t be any more new little ones anytime soon.

Why do we talk about how much babies look like Dad?

If your man is bald and wrinkly, this alleged resemblance between him and your newborn might be a no-brainer.

However, researchers have noticed that regardless of how the baby actually looks, mothers (and her relatives) are particularly likely to comment that the new baby resembles her male partner. Why is this? Because they are subconsciously providing reassurance to Dad that he is indeed the biological father of the child, leading him to invest more physical and psychological resources to the child. Indeed, numerous studies have shown that offspring who resemble their fathers enjoy better outcomes.

Of course, these days, DNA testing can put to bed any doubts the father might have over his child’s paternity. We are simply mimicking the behaviour of our ancestors. 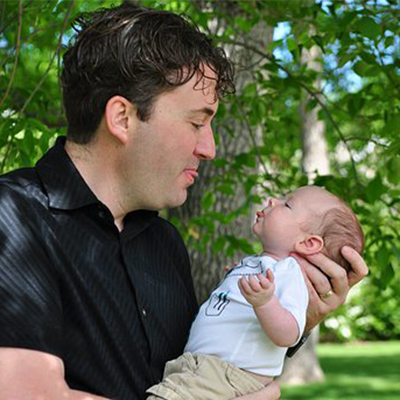 Why does my baby cry in my accent?

Question: How can you tell a German baby from a French baby?

A) Ask the baby’s parents

B) Check if the baby is wearing lederhosen or a beret

C) Listen to the baby’s accent.

Answer: All of the above (except for possibly B)

Is it really bad if I lick my child’s dummy clean?

The particular habit that many parents have of sucking clean their baby’s dropped pacifier before popping it back into their child’s mouth is generally condemned by health authorities. However, a group of Swedish researchers have found that this behaviour may confer unexpected health benefits to the offspring of these parents, namely, lower rates of allergies, asthma and other auto-immune diseases. The reason behind this is that sharing spit may help teach an infant’s body to differentiate between trivial threats and more harmful ones.