It’s National Donut Day this Friday! And before you ask, yes, you can get donuts for free.

In an age where we are all becoming far more conscious of what we’re eating—which, don’t get us wrong, is a very good thing—it’s comforting to know there is still a little room for some decadence. And the first Friday of June is when you can go all out to indulge it. 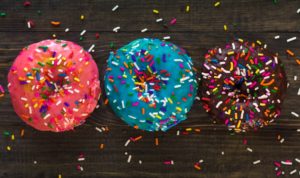 That’s right, you don’t have to wait until Christmas for your diet break! National Donut Day is your saviour.

Now, if you have a bit of a sweet tooth, then you are probably quite content to consider any day National Donut Day—but if you’re the sort of person who needs a little motivation to embrace your ‘sprinkly’ side, then Friday the 7th of June has your name written all over it.

There are just so many appealing things about donuts. They look good, they taste great, and they epitomise the frivolity of childhood innocence in one circular piece of icing-coated bliss.

They’re even a great scientific instrument. Use them as a visual aid to explain things like wheels, the concept of infinity, and why the Earth is round.

As one of history’s sharpest minds, Homer Simpson, once commented: “Donuts: is there anything they can’t do?”

And the answer, of course, is no.

But its history is specifically traced to The Salvation Army. The day honours its members who, during both World War I and World War II, picked up soldiers’ spirits—not to mention satisfying their appetites—by serving donuts near the front lines.

These days, it serves as both a fundraising event and as a way to simply celebrate the tasty treat. Count us in! 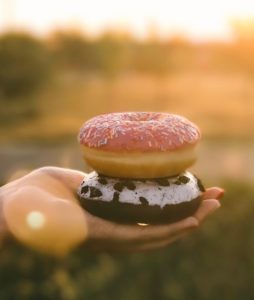 The evolution of the donut itself is all about simple fun combined with fantastic flavour.

Typically made from a flour dough and then deep-fried, donuts have all kinds of fillings and toppings. And over the years these have only become more elaborate—limited only by chef’s imaginations.

Thankfully, the thing that hasn’t changed is the deliciousness.

But, remember, everything in moderation. Or the exact opposite of this…

Enough talk. How do I score free donuts?

Alrighty, let’s get to the really important stuff. In Australia you have a few options to grab some free donuts. At Krispy Kreme, all you have to do is show up at a participating store! While Goldeluck’s also has a pretty cool promotion going on.

Now all that’s left is the process of deciding which donut to choose! If you need a little help to decide, take our Which donut are you? quiz below.

Then it might just be an idea to eat slightly healthy again—and we’ve got some great healthy winter lunch ideas to help.